WHERE YOU CAN SEE MY WORK THIS SUMMER

Okay, finally a moment to write about my upcoming shows--or those already installed (or past)! First,  I curated a show at the Harlow Gallery in March and April called "Altered" which included artists Karen MacDoanld, Daniel Anselmi, Ieva Tatarsky, Jessica Straus (from Boston) and Paula Green. The show was beautiful, and well received. I had collages in a group show in May at the Jonathan Frost Gallery in Rockland and "Season Opener" at the Betts Gallery in Belfast. Currently I am in good company in a new gallery in Casco, right on busy Route 302, There will be an opening reception on July 22 from 4 until 7. The gallery is owned by Martin Friedman. My only solo show this season will be at River Arts in the West Gallery which I have again rented for a two week stretch beginning July 28 until August 12. Stop by during the open hours of the main gallery, Tuesday through Saturday 10 to 4 and Sunday 10-2. The opening will be July 29 from 5 until 8, ALL WELCOME! Later in the summer, I'll have some work in the Betts again in September, in another group show, and again at the Jonathan Frost Gallery in August (I think, I'll have to check that it is August and not September!) 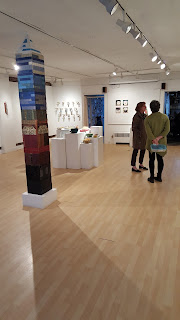 Shot of installation of Altered at the Harlow Gallery, Hallowell, Maine, March/April 2016 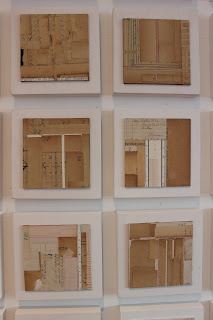 Detail shot of six collages from "49" 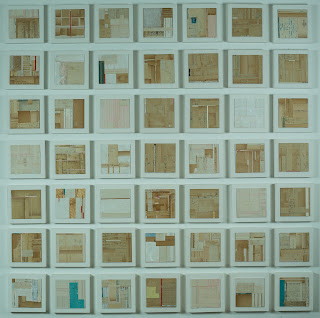 Check out the summer issue of the Maine Arts Journal, an online publication of the Union of Maine Visual Artiists, for a number of spreads (images and artist statements) on the subject of muses by a bunch of Maine artists, including me. If I knew how to add a link here, I would!

Anyone is VERY welcome to come anytime to my studio! Just give me a shout to make sure I will be around. My cell phone number is 207 542 9607. I have hosted a number of guests already this summer, and it is fun for me to share my gardens as well as my studio and latest works in this way.